When Brian and I decided to embark on an exterior makeover of our house this summer, it was a REALLY big deal for us. Especially because it involved painting the exterior from blue to white.

We built our house when I was pregnant with our older daughter, Lila. We’d never lived in a house together (only a rental apartment), and we’d never lived with kids. We were young, creative parents in love! That’s why we stuccoed it blue — and why, 17 years later, painting the exterior of our house white has been such a huge change. When we chose the blue color, we mixed it in with the stucco. In other words, we never expected to paint over it.

Yes, a blue house!!! Who would willingly stucco their house blue? I’ll tell you who: People like us who don’t plan to sell it, ever. Here’s what it looked like… 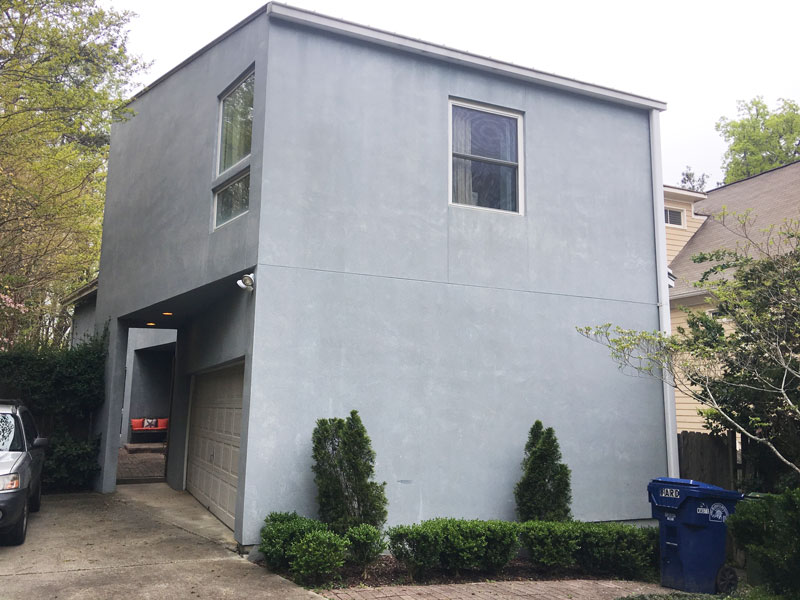 Fun, right? It seemed pretty crazy at the time, although our trip to Ireland last summer showed us that to the Irish, at least, a blue house is perfectly normal. Maybe it was in our Irish-American DNA. These are some blue houses in Dingle that have shops on the ground floor: 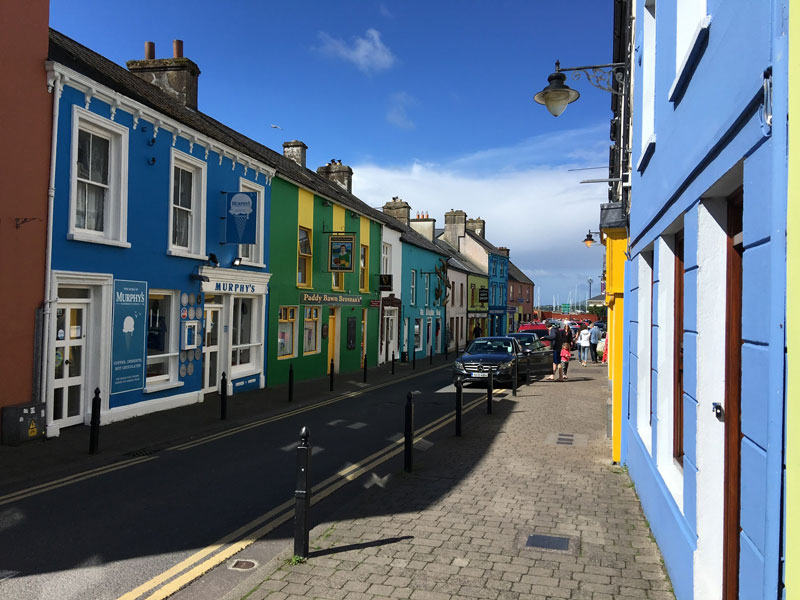 They blend right in — and they’re a brighter shade of blue.

But here in Buckhead, one of Atlanta’s most conservative neighborhoods, our blue-gray house stuck out. When our Leyland Cypresses finally got tall enough to hide it from the road, we didn’t mind.

How We Settled on Painting the Exterior Blue

Back when we were building the house, Brian was already a registered architect. I was pretty clueless about decorating at that point. I hadn’t yet become a shelter magazine editor and I wasn’t confident enough to trust my gut instincts about things like paint colors… (I now have an ever-growing board on Pinterest about color palettes and paint colors! Check it out.)

Back then Brian’s taste was very contemporary — streamlined and bare. Because he was the one designing the house, I wanted him to feel he could shape it to match his vision….

Since then I’ve learned that although my intentions were good, I should’ve taken more time to envision what I really wanted. Yes, he was the architect. But I was going to live in it.

I’ve also learned that that my interior design taste lies somewhere between classical and modern. When you grow up in a 200-year-old house in Boston, then live in Italy for five years, as I did, chances are your sense of beauty will include trim details…

We were our own general contractors on the building of our house. So we were insanely busy choosing and managing everything. Before we knew it, we’d hired a painter who needed our paint color immediately so he could buy paint. Truthfully, the exterior color was the last thing on our mind.

Without giving it much thought, we went for the one color that we both absolutely loved: blue.

After I met Suzanne Kasler, the interior designer, she asked which house was mine. We lived in the same general neighborhood. I remember her saying, “Why did you pick that shade of blue?” At the time I had no reply other than, “We liked it…?” In hindsight I wish we’d gotten a third opinion before we made our final choice.

Try living in a blue house and you’ll see just how powerful an experience it is! It’s like the blue takes over your sense of everything, it has that much character.

We could see it in our kids when they were little. When Lila’s elementary school teacher asked her to draw “a house,” she made the house blue.

Everything we did outside had to go with the blue. I planted white crepe myrtles beside it instead of pink. I chose coral pillows for patio furniture instead of blue. Even potted plants color-coordinated. It was like the house was making decisions for me.

The blue was a good choice for us back when we built it because it was breezy and fun. And we did love the blue for about 15 years… In fact, we loved it so much that we painted the interior walls on the first floor a very pale blue-gray, too.

How We Decided On Painting the Exterior White

When I started getting sick of the blue, my knee-jerk reaction was to think about moving. Some of my friends had bought new houses. I was jealous because I wanted something more traditional. I wanted shutters and shingles. I wanted Nantucket and Chianti all rolled into one.

… And yet I loved the house for so many elements that I’d never get in a more traditional house (at least not one we could afford). Above all else, I loved the fact that Brian designed it. I loved that it was one-of-a-kind and full of natural light. The idea of anyone else living in my house made me feel sick.

My conflict ate me up inside — disliking and loving the house at the same time.

Then one day, as I was stewing miserably over it, I found myself staring at photos of houses in Rosemary Beach, Florida. I love that area and I like many of the houses. I never gave much thought to why I liked them so much before that moment. Suddenly I realized the houses I liked most were all white stucco. Just like houses in Greece.

Would Brian consider painting the exterior of our house white?

Lucky for me, as soon as I pitched the idea he was on board. He was tired of the blue, too. It was hard for him because everything we change about the house feels like a small failure to him as an architect. Yet most of the time when it’s done, he’s blown away by how much more he loves the house.

So we agreed that we’d paint it white. But I had a huge fear: I wanted to make the house look LESS contemporary, not more. Our younger daughter, Aislin, already thought the house looked more like a museum than a house. Would white paint make it appear more of a geometrical abstraction than a cozy family home?

That’s when I realized that the solution was not just to paint the house white but to revamp the exterior by adding… gasp… trim details.

A plan starting forming in my mind. We would turn our house into one that looked like a little beach villa, right here in the heart of Atlanta.

We would make it the house we’d want to live in for decades more, the one we’d never willingly sell.

So far so good!

Painting the Exterior of Our House from Blue to White

When Brian and I decided to embark on an exterior makeover of our house this summer, it was a REALLY big deal for us. Especially because it involved painting...

The 15 Best Dishwashers 2018 from Buyer Reviews

Appliance Brands and Models: How to Choose

Invasive Plants that Will Take Over Your Garden

Seed Catalogs: 15 of the Best for Annuals, Vegetables and Perennials

7 Light Blue Flowers to Grow In Your Garden

Borage: How to Grow This Edible Annual

Your Planting Zone and the USDA Plant Hardiness Zone Map

Growing Cornflowers, or Bachelor Buttons, in Your Garden

17 Easy Vegetables to Grow at Home